Dick Clark, the legendary radio and television personality who hosted American Bandstand and Dick Clark’s New Year’s Rockin’ Eve, has died. He was 82. Clark died after suffering a massive heart attack, his rep said in a statement to The New York Times. 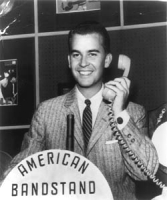 Not only was Clark an enduring presence in front of TV cameras for six-plus decades, he was a power behind them as a producer and head of Dick Clark Productions.

Born in Mount Vernon, N.Y., he began his career in radio in upstate New York before moving in 1952 to Philadelphia radio station WFIL-AM, which had a sister TV station that started a show called Bob Horn’s Bandstand. He sometimes subbed as host, and when Horn left, Clark took over. He hosted the show, renamed American Bandstand, from 1956 to 1989. The program went national on ABC in 1957, moving to the West Coast in 1964, a year after going from daily to weekly. For a generation of teenagers, it was an after-school staple — something you rushed home for.

Married three times, Clark is survived by wife Kari Wigton of 35 years, and three children from his first two marriages. 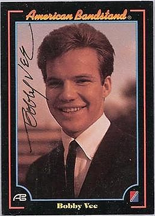 Dick Clark was truly one of the good guys.  We go back to the earliest days of American Bandstand.  Between Phillie and Los Angeles I probably appeared on the show a dozen times in addition to appearing on many of his Caravan of Stars Tours throughout the U.S. and Canada.   We were on tour together in Dallas, TX when Kennedy was shot.

When Dick spun your record you knew you had a hit, and he certainly played an important part in my career.   I remember being at his birthday party on a tour back in 1960, walking up to him and saying, “Mr. Clark, you sure look good for a guy your age.”  He never let me forget it! 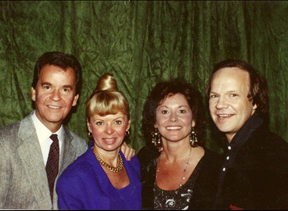 We remained best of friends over the many years and occasionally reunited for TV shows and the live concert events he continued to produce right thru the 1990’s.  In fact, in 1990 he came into St Cloud, Minnesota and appeared as a special guest and host of our annual “Rock’n Round The Clock” fundraising concert for the Catholic Schools.  His wife Kari was a fellow North Dakotan that later relocated to St. Cloud and was very proud of her mid-west roots.  They were a loving couple, kind and gracious.

In 2006 we helped open up the Dick Clark American Bandstand Theater in Branson, MO, along with my buddy Fabian, Righteous Brother Bill Medley, Paul Revere, and several of our other rock and roll friends.  It was the most authentic 50’s and 60’s reunion under one roof anywhere in the world.  Every night we celebrated the spirit of Dick Clark, American Bandstand and the legacy that we were all proudly a part of.  We sang our songs, told our stories and listened to the countless memories of fans from around the world.  It would be impossible to accurately measure the impact Dick Clark had on so many lives but I saw it first hand all of my life.

Dick was simply one of the most important people in the early days of rock and roll and since.  He was a dear friend and will be greatly missed by The Vee family.