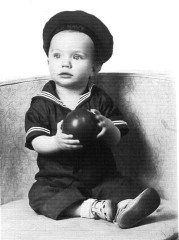 Bobby Vee was born Robert Thomas Velline in Fargo, North Dakota on April 30, 1943 into a musical family. His father Sidney played the violin and piano, his uncle played sax, and his two older brothers, Bill and Sidney, Jr. both played guitar. By the age of fifteen Bobby’s musical career was already under way. “I played saxophone in the high school band,” remembers Bobby, “but I wanted to rock out. We were playing all the standard band pieces and I wanted to do ‘Yakety Yak.’ My brother Bill went out and bought a guitar and I saved up enough money from my paper route to eventually buy a new (but sun faded) thirty dollar Harmony guitar for myself. We used to go to all the country music shows that came through the area and then would come home after and do our own version of the show in the living room of our small home in Fargo.”

Before long Bill had become an excellent guitar player and began jamming with bass player Jim Stillman and drummer Bob Korum. Bobby tried every angle imaginable to join the group sessions but Bill thought he was too young. “I kind of backed into the band. I used to make all kinds of deals with my brother to come along and practice. When he finally let me join him (if I would promise to keep quite) I was aware that they didn’t know any of the songs lyrically and I just happened to know them all. I was fifteen years old and my ears were glued to the radio. It didn’t take long before I started singing the songs and they started rockin’ along.” Before long, Dick Dunkirk took Stillman’s place on bass guitar and the “Shadows” became one of the top new bands in the area.

At this point, as the result of a tragic twist of fate, Bobby’s story begins to take on a bitter sweet flavor. The date was February 3, 1959. A light plane carrying Buddy Holly, Richie Valens, The Big Bopper and 20 year old pilot Roger Peterson crashed in a snow covered Iowa field, killing everyone on board. Only minutes earlier they had finished their performance at the Surf Ballroom in Clearlake, Iowa and had rushed to the airport in nearby Mason City to catch the charter plane that was to bring them to their next engagement in Moorhead, Minnesota. News of the tragedy traveled fast. People at the local radio station in Moorhead, like everyone, were in a state of shock. The rest of the tour had arrived by bus from Clearlake after a cold and snowy all night drive. A decision was made to continue on with the show. The promoters asked for local talent to help fill in that sad night and as the curtain came up that evening, a new voice was introduced to the world. A “fifteen year old” voice that knew all the words to all the songs. Bobby Vee. In the following thirty plus years Bobby would go on to place thirty-eight songs in the Billboard top 100 charts, six gold singles, fourteen top forty hits and two gold albums. But that night, instead of a seat in the audience Bobby and his brother Bill along with the “Shadows” took the stage in memory of three of rock ‘n’ roll’s brightest stars. 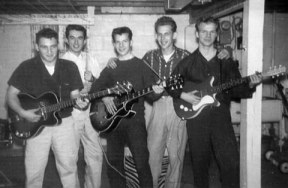 Their first paying gig was on Valentine’s Day 1959. They drove 45 miles in zero degree weather in a heaterless ’51 Oldsmobile to play on benches that had been pushed together to form a makeshift stage. In the middle of the show the benches pulled apart and the amps smashed to the floor. Not exactly the kind of impact they were looking for. The band made $60, which any musician can tell you was damn good for a first gig in those days.

June 1st 1959 Bobby and the group went to Minneapolis, Minnesota to record a song for Soma Records that Bobby had written called “Susie Baby.” By the end of the summer, “Susie Baby” had reached number one on all the local stations in the upper mid-west and major record companies were calling with interest in signing this new young singer. Bobby Vee and the Shadows signed with Liberty Records in the fall of ’59 and the band continued on until 1963, when Bill deciding the road was not to his liking, left to pursue interests closer to home.

Late 1960 after a couple of songs had barely inched their way into the national charts it appeared that Liberty was losing faith when a radio station in Pittsburgh, PA began playing the back side of what might have been Bobby’s last single. The song was “Devil or Angel.” It had been a R&B it a few years earlier by a group called The Clovers and was a favorite of Snuffy Garrett, the young producer responsible for signing Bobby to Liberty. Following the records success in Pittsburgh, “Devil or Angel” went on to reach the top ten in city after city. By the end of 1960 it peaked at number 6 in the Billboard charts, as well as reaching the top 20 on the R & B charts. Liberty Records exercised its option and signed Bobby to a five year contract.

If “Susie Baby” served as Bobby Vee’s entrance into the world of Billboards hot 100, then ‘Devil or Angel’ was certainly the foundation for a string of hit records reaching the nations top 20 throughout the entire 60’s era. Bobby’s hits were not limited to America. By 1963 he had collected seven top ten hits in England as well as a number 2 album called “Bobby Vee Meets the Crickets” and in 1963 shared the charts for forty weeks side-by-side with the Beatles. His tours took him to Japan, Australia and Europe as well as the United Kingdom, where he is still a yearly visitor. His thirty plus year recording career has produced over twenty-five albums including a Gold Album from England for his 1981 “Singles Album” release. Back in the U.S., Billboard Magazine called him, “One of the top ten most consistent chart makers ever.”

Into the nineties, the beat goes on. With the continuing demand for product by classic oriented radio stations and collectors alike, EMI/Cema issued a twenty-five song re-mastered compact disc and cassette as part of the Legendary Masters series. Late in the year, a re-issue of his 1963 Christmas album was made available. To coincide with his sold out 1990 tour of England, Bobby issued a 17 song collectors edition cassette called “U.K. Tour ’90,” on his own Rockhouse Record label. The tape, an anthology of sorts, included new material recorded with his sons, as well as several previously unreleased songs from past years. In 1994 critics and collectors gave great reviews to his “Last Of The Great ‘Rhythm’ Guitar
Players” CD. As testimony to Bobby’s high energy show and continued popularity the annual readers poll by sixties music magazine The Beat Goes On voted him: 1991 Best American Act; 1992 Best Live Performer; 1993 Favorite Male Singer; and in 1994 he was named Runner Up to Paul McCartney in the category of Most Accomplished Performer.

On June 20, 1999, Bobby was presented The Theodore Roosevelt Rough Rider Award by North Dakota’s Governor Ed Schafer. The Rough Rider Award is the highest recognition given by the state to native North Dakotans. Gov. Schafer said, “Throughout his success, Bobby has maintained his North Dakota roots and values. He is praised by many of his peers not only for being a talented performer, but a kind, good and humble person. I am extremely proud to honor him with this award.”

Between Europe and America, Bobby and his band continued to perform about a hundred dates a year. When he was not touring or working on his own music, he remained involved in the production of various other musical projects at his Rockhouse Recording Studio, located outside of St. Cloud, MN.

In 2011, following a shocking diagnosis of early Alzheimer’s Disease, the decision was made to retire. Bobby pulled back from touring and had a stretch of retirement shows including Joetown Rocks in St. Joseph, an annual event he helped to create.

For much of 2011, he concentrated on his two loves – his music and his family.  He loaded up the family and made a cross country RV trip to Tucson, Arizona to move into their new winter home.  And as part of the healing process, he and his family made music.  They recorded family favorites and realized their fans would want to hear these sessions, so a new CD is in the works.

From the white socks and ducktail days of “Susie Baby” to the high tech digital present, Bobby continued to grow as an artist and entertainer building a loyal following of fans and friends alike.